Inside every a6000 and a7 series camera is a set of Sony-made apps to extend the functionality of the camera. One of those apps is called Time Lapse and this video DigitalHypeTV demonstrates the use of the app, which turns the camera in to an “intervalometer,” the fancy name for a camera capable of taking a series of images over a period of time.

Many users of the Sony a6000 and a7 series systems have no idea that the cameras have built in app stores with a number of add-on programs available to give the camera additional creative functions. The Time Lapse app is perhaps the most powerful of the tools as it eliminates the need to use extra hardware in order to capture time lapse images.

For $10 Sony photographers can turn their cameras into a sophisticated and configurable time lapse machine. There’s a bit of a question as to whether or not Sony should charge for the software tools, in fact Sony is the only company we know that charges photographers for software that enhances the functionality of the own camera system.

The apps can be downloaded directly on the camera or via the incredibly confusing Sony PlayMemories Camera Apps site.

Prices vary on the rest of the Sony camera apps, which include Stop Motion, Sync to Smartphone, (which we covered in this article), Smooth Reflection, Lens Compensation, Star Trail, Motion Shot, My Best Portrait, Multiple Exposure, Smart Remote App. 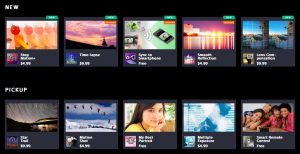