Photographer Roger Cotgreave has an incredible eye for detail and a great sense of color and composition. We ran into him on the forums of DPReview, where he goes by the name Tao Jones. It’s a name he started using in forums, and it stuck for his photography thanks to his easy-going style. We asked him to share some of his excellent work, which as of late has been done on the Sony a6000.

He is the official Photographer for the Byron Bay Bluesfest Festival which is Australia’s largest International Festival of Blues and Roots Music. The Bluesfest is held on the full moon at Easter over a five day period. He also shoots for other festivals around Australia such as Groovin The Moo, NImbin Mardi grass, Mullumbimby Music festival, Byron writers Festival. As well as shooting for local musicians. He also creates web pages and performs graphic desgin work.

Find him and his work at taojonesphotographer.com

How long have you been a photographer?

I started very early in the 60’s after the movie ‘Blowup’ but gave it up as I couldn’t afford it, plus the girls never happened. I jumped on the digital bandwagon when the canon G2 came out.
In 2003 I bought the Canon 10D full frame and the Canon 85mm f1.8 plus the Canon 70-200mm f4. I did my first festival with that set up. Since then I have worked my way through most of Canon’s full frame cameras. I now have the 5Dmk3 and the Canon 6D.

What type of photography do you specialize in?

Do you consider yourself a professional or an enthusiast photographer?

I do photography because I just love doing it. That passion has led me to being paid for it.

What made you decide to buy Sony gear?

I wanted something lighter than the Canon gear and easier to carry around. I waited until the focusing on the mirrorless cameras got faster. Sony was a head of the pack. I read every review and I would say the A6000 is the best at the moment for the type of shooting I want to do. I have it set up exactly like my Canons with back button focusing.

What Sony gear do you use (include your favorite lenses, accessories, etc.)

I only have the A6000 and I will get a Sony full frame when the auto focus gets faster. I have the kit lens and used it twice. I bought the three Sigma emount lenses and only use them. They are unbelievably good lenses I am amazed at the sharpness.

What are your thoughts about shooting with your Sony gear, and specifically versus other gear you’ve used?

I have no cons with the A6000 except maybe the boot up but that is only a minor point. The pros are enormous—the weight, the built quality and image quality. The amount of things you can do with it if you want to. I don’t use much of the things you can do with it like lock on focus, rapid fire, etc. The layout is good and everything is at your finger tips. Being able to see basically what image you are going to get in the view finder. The ability to zoom in M mode and focus peak. The menus are clear and the customization is terrific. 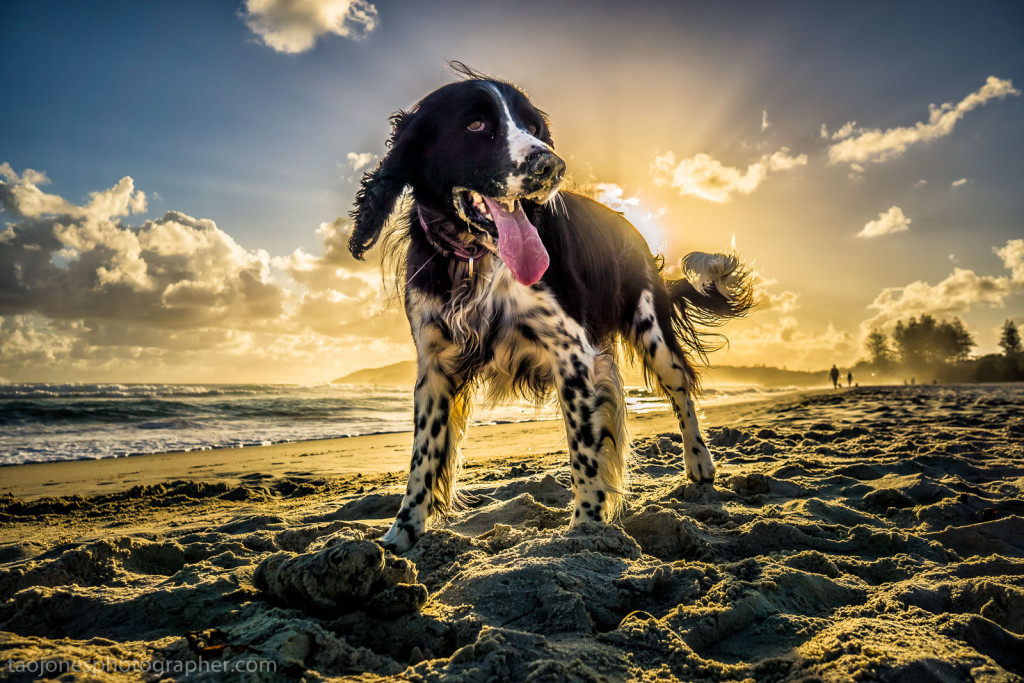 Can you pick one of the photos and tell us about it. How you thought of capturing it, how you went about capturing it and what makes it special for you.
I am thinking of doing a book called ‘Tails from the beach’. A dog book. This photo I took the other day it’s special to me because it is my dog. I was shooting action shots of dogs catching balls jumping into the ocean etc.

My set up was, M mode, center point, one shot at a time with BB focus, AF-C in RAW.

My dog was digging I saw the sun so I set up myself so she blocked the sun out I exposed a stop and half over lowered my camera and used the swivel screen (another good feature) to compose the shot, bingo. I really didn’t have to do much in LR it was just a few slider tweaks.