See if you can follow along on this logic: A number of the Sony rumor sites are reporting that Sony will definitely release a 50-megapixel camera because of a statement made by Sony executives about Sony lenses.

That statement was attributed to Akihiro Egawa and Makoto Kanai involves a comment about the design of Sony FE lenses.

So far so good. Sony folks said something, rumors sites reported it. However, the rumor sites are reporting the news with the headline “Sony Officially Confirmed they are Working on 50 MP Camera” and in fact if you google “akihiro Egawa Sony” you’ll find a number of rumor sites with the exact same headline.

First, this shows that a lot of the Sony rumor sites are run by the same people as link farms, but it also shows that people who run the rumor sites don’t necessarily know what “officially” means. Generally when a company “officially” says something, they say it outright. As in “Tim Cook Officially Says Apple Watch Will Ship in April” because Tim Cook directly stated the Apple Watch will ship in April.

Here, though, is the problem with this rumor, no one at Sony actually said they’re making 50-megapixel cameras. Only that they’re capable of doing so with the current lenses. In fact, if you follow the link to the Spanish DSLRMagazine.com (how did someone in Spain snag that domain name first?) that they rumor sites are pointing to, the interview with the Sony executives says the opposite.

Thenewcamera.com announced “When asked if the current FE lenses can resolve future 50+ Megapixel FF sensor the answer was yes!”

Sonyff.com un-gramatically concluded “So that only means that Sony is working on a 50MP fullframe mirrorless camera as suggest[sic] by rumors.”

SonyAlphaRumors.com takes that same information and comes away with this familiar quote ”

4) When asked if the current FE lenses can resolve future 50+ Megapixel FF sensor the answer was yes!

Obvisouly…when asked…Sonydid not share any information about the new FE lens release or any future possible new FE camera.

Let’s back up a second.

Before we see what Sony actually said, we just want to state that for the record (i.e., “officially”), we think that Sony will make a camera at at least at 50-megapixel resolution. Mostly we think that because Sony and Canon have been working together on sensor designs in order to chip away at Nikon. The Sony RX100 III and the Canon G7X are widely thought to have the same Sony sensor on board. And the Canon EOS 5D is probably packing a Sony sensor. We just don’t think they’re going to rush to market with it.

So now let’s take a look at the question and answer cited in the rumor sites from the actual interview. (Since the pages were originally in Spanish, we’re relying here on the Google Translate version, which seems pretty darn good.)

Just below this photo on the article (© Albedo Media SL) 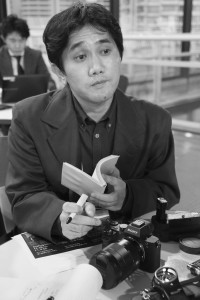 Apparently, there is no immediate intentions by Sony to increase the resolution of their sensors … seem more interested in its new A7 S and high sensitivities.

Insert a sound here of a record needle scratching across a record.

Just below that the copy reads (in a slightly mangled translation)

And although it seems Sony has no plans to present the market -at least so immediately a camera with higher resolution than the A7 R , asked about the response capacity of the new targets for FE frame, and whether they would be “appropriate” for a sensor of, say, 50 Mpx … “Yes, there is room” simply answered.

So the “official” confirmation from Sony that all the rumor sites are going nuts over is actually that one of the two Sony engineers on had at the CP+ show said that the current line of lenses would work above 50-megapixel. If that design choice were enough reason to empirically justify announcing there will be a 50-megapixel camera, then that would have been true since the very first FE lens shipped and should have been “officially” declared then.

Also, if lens design is the arbiter of sensor resolution than technically the Canon 50D shouldn’t have come to pass—most of the glass designed for the last few decades isn’t up to the challenges of a high-resolution sensor. By the argument of sensor size being predicted by lens design, you could say that almost every Canon lens on the market “officially” indicates that Canon won’t make a 50-megapixel camera. And we know that’s not true.

What’s the takeaway here? Sony thought about the future when making their lenses, they’re probably better prepared to make kick-ass high-sensitivity gear and they have a roadmap of products that they’re not talking about.