Phase One introduced its first Styles Packs for photographers in June, then followed up with the SPECTRUM Styles Packs last month. Building on those imaging editors, Phase One just released the Film Styles Pack and I used it today.

Inspired by both color and black-and-white analog film emulsions of the past, the Film Styles Pack is designed for photographers who want to recapture that retro grain and texture in their images. There are 15 looks, with each one available in three different strengths, for 45 styles total, from subtle (minus) to strong (plus) and in between (normal). There are 33 color looks and 12 black-and-white looks.

Like the earlier Styles Packs, the Film Styles Pack is also designed to assist photographers in optimizing their workflow, making image editing faster while allowing creatives to maintains control of the process. The pack is available for both Mac and Windows.

Priced at $69, the Capture One Film Styles Pack is available from the Phase One online store now. 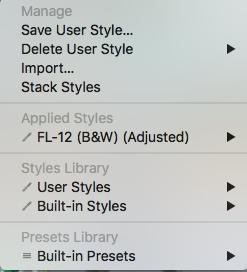 See the featured image on this post for a photo I used the pack for this morning. It’s FL-12 with a few tweaks in the Black and White color sensitivity.