I’d been preparing by looking at the weather forecasts for the partial solar eclipse in the UK for a few weeks, booking off time from work to be sure I could get out. In South Devon the eclipse was forecast to start at just after 08:21 GMT and a maximum of eighty-five per cent at about 09:27 GMT and ending just after 10:36 GMT. The weather forecasts for Dartmoor are often plagued with last minute changes given its intricate micro-climate.

The prevailing winds are usually from the west but on Friday morning they were from the north west with unpredictable cloud banks moving in an out. I headed out at 6.30am and headed towards Plymouth, going the long way around to arrive at Great Staple Tor on Dartmoor. This gave me a chance to see what the westerly cloud patterns were like just in case I needed to head further north or west. Luckily the weather forecast was spot on. As I arrived, the clouds started to move southwards and the sun was starting to emerge as I walked up the 150m climb to the tor.

I had two plans; one to capture the phases of the eclipse at a long focal length; the other to get a silhouette of the tor and the eclipse in the same shot. As I arrived and setup quite a few other people were there with handhelds and DSLR’s. I had with me a fairly full kit.

My setup would be a bit of a mix-mash. I decided to use my A7R for the handheld shot of the tor with my Zeiss 55mm f/1.8 as to not give massive flare at f/8. For my close-ups I decided to use with my A6000 for 2 reasons; The first was potential for damage, the A6000 being a cheaper body; the other being the 1.5x crop factor giving me native 50% more focal length (although you could of course crop the 36 megapixel A7R RAWS or shoot in crop mode).

To achieve a long focal length I used a combination of teleconvertors and a zoom lens. I used my Canon 70-300mm f/4-5.6 USM L, then my Canon 1.4x III TC  then a 3rd party Kenko 2x MC 7 DG teleconverter. This was attached to the Metabones IV and then to the A6000 body. Of course the 70-300 is attached to the tripod via a lens collar as it would be way to heavy to suspend of the A6000. Lee Filter Systems recommend 18 stops of filtering to reduce the sunlight coming into the lens. There are also recommendations that we should use proper solar filters (metal coated to also block more infrared). Having asked around I decided to just use a 10 stop ND filter (Lee 100mm system), a Heliopan 105mm circular polarizer. In addition shooting on f/11 would also help reduce the light levels. The beauty of using the Metabones IV E-EF adapter is you can put it into advanced mode. This allows, amongst other things, to shoot in permanent DoF (i.e DoF button is always activated). This would reduce the light influx all the time rather than just when capturing. If you add up the stops, including 3 stops for the the 2 teleconvertors) then I had 10 + 6 + 3 + 3 = 22 stops of light reduction, I thought it was worth the risk.

Of course the setup does not come without issues. Firstly in a normal setting this would be useless for anything moving but the sun is so bright this pretty much nullifies it. Secondly the TC combinations reduce the sharpness. I have used this combination before for landscaping—the Kenko TC is not bad in combination with the 70-300 lens. Of course it softens the image but with the A7R on the back the extra resolution allows for more detail and a bit of added sharpening. With the A6000 not so much. However for this exercise I only wanted the shape of the sun and maybe a few sunspots so again not really a big issue. The light is in abundance so shutter speeds can creep up to 1/2000 thus reduce issues with lens shake (I switched off image stabilisation). All in all the relative focal length I could achieve was 300mm x 1.4 x 2.0 x 1.5 = 1260mm. All images were then imported and processed in Adobe Lightroom. 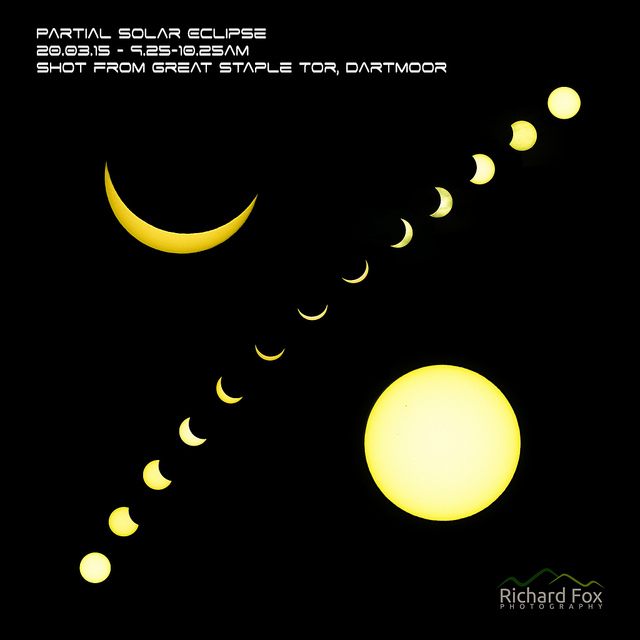 Luckily I had very little cloud to get clear shots of the eclipse, although cloud can help you achieve shots with less filtering. I managed to get the major phases of the eclipse and compiled them in Photoshop.

The handheld shots came out well with some small but unusual flare on them. 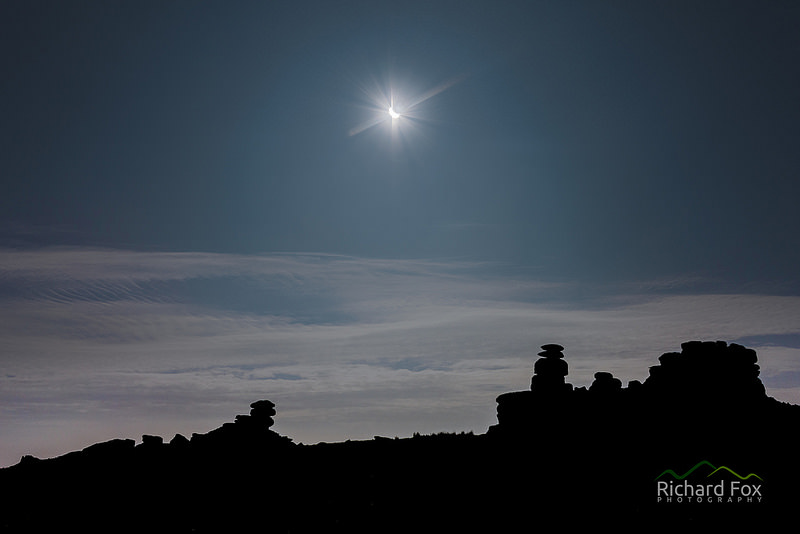 I also took a series of over exposed shots when the clouds temporarily rolled in some of which displayed a lovely halo. 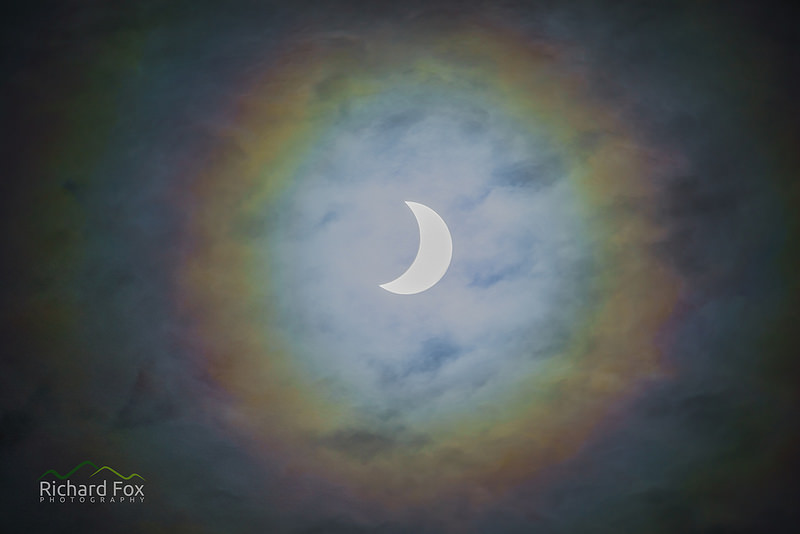 Seems you can plan for some things but some just are down to luck in landscape photography.