DxO has completed their testing of the new Sony FE 28MM F2 lens and have found that it came in just behind more expensive Zeiss 35mm F1.4 ZA lens. The complete review of the Sony FE28MM F2 is available on the DxOMark website.

Head-to-head against the $798 Carl Zeiss Sonnar T* 35mm F2.8 ZA, it’s very close, with the FE 28mm F2 coming out on top at 34 points to 33 points. The cheaper Sony lens wins for overall sharpness, too, 24P-Mpix compared to 22P-Mpix. At F2.8, however, the 35mm F2.8 lens is marginally sharper across the entire frame, which is important if you shoot a lot with the aperture wide open.
The new Sony lens boasts almost one stop better Transmission, too, but there’s virtually no difference for Vignetting, with scores of –1.9EV vs –1.8EV. The Sony 28mm falls down against the 35mm F2.8 for Distortion & Chromatic Aberration, however, where the 35mm F2.8 ZA posts notably better results.
Costing over three times more, the $1598 Carl Zeiss 35mm F1.4 ZA achieves the highest overall score of these three lenses with 38 points. Overall, the FE 28mm F2 achieves a slightly better Sharpness score of 24P-Mpix compared to 23P-Mpix for the Zeiss, due to its sharpness at F1.4. From F2.8 onward, however, the Zeiss 35mm is stronger and offers homogenous sharpness between F2.8 to F16. At the lens’s maximum apertures of F2 or F1.4, the FE 28mm F2 offers good sharpness in the center, but with softer corners compared to the 35mm which, although not as sharp in the center, provides more homogenous resolution across the frame.

There’s not much in it for vignetting or transmission, but again there’s a big difference in both Distortion and Chromatic Aberration scores, for which the Zeiss 35mm f/1.4 is a lot stronger. 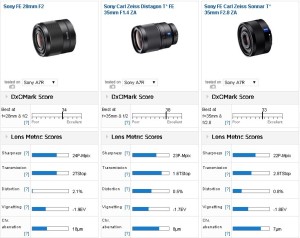 This is pretty spectacular, considering how inexpensive the Sony FE 28mm is. At a third of a price you get a lens that’s slightly better than the Zeiss in some aspects and just a bit behind in a few others—and the places the Sony lens falls behind are easily fixable in post processing.

Ranking third for all hybrid lenses, just behind two significantly more expensive Carl Zeiss options, is a great result for the Sony FE 28mm F2 lens. At a cost of just $498, and boasting a “fast” F2 aperture and solid results in most categories, it’s an affordable wide-angle solution for Sony A7 series shooters. It’s actually marginally ahead of the Zeiss wide-angle competition overall for sharpness, but isn’t quite as strong at F2.8, where the corners drop off a little. The main area of concern is Distortion, however, with quite heavy “barrelling” that landscape and architecture photographers will want to correct in post-production.