Update: After we wrote this editorial, Dave Evertt on Facebook pointed us to a link where Rockwell gushes over the A7 and its ability to work with his Leica lenses…via adapters. We’ve added that to the end of the article.

Ken Rockwell has been a long time photographic blogger, spouting off on various camera and technique topics. He’s respected by some and reviled by others. A reader just pointed out a new blog post of his called Lens Adapters: Don’t Do It! that’s so off-the-charts nuts I thought I’d address it a bit, lest it enter into the realm of being considered factual, and spend a moment talking a bit about how lens adapters work, and why they’re so powerful on the Sony system.

Rockwell starts off his rant with this assertion:

People keep getting all excited about putting good LEICA lenses and NIKON NIKKOR manual-focus lenses on their mirrorless cameras. These contraptions work poorly, but mirrorless camera and adapter makers fuel the fire, so people keep doing it.

FrankenKameras are a bad idea. LEICA lenses on other cameras work WORSE than using the camera’s own-brand lenses! The $500 Canon 20/2.8 USM works better on a 5D Mk III than a $5000 LEICA lens works on the Sony A7!

I’m not sure where Rockwell is generating this fact, but it’s wrong. Very wrong.

First of all, a $500 Canon 20mm f/2.8 USM is a great lens, and the Canon 5D Mark III is a great camera, but there’s absolutely nothing from a physics, optics or photographic standpoint that would make a $5000 Leica lens perform worse on a Sony a7.

As a result, the Sony a7 series is smaller from the sensor to the lens mount, which is why it was necessary for Sony to create a series of new FE lenses to work with their full frame mirrorless system, and why the A-mount lenses need an adapter.

It’s easier to use a DSLR lens on a mirrorless system than the other way around, because it’s easy to make an adapter that simply increases the distance from the mount to the back of the lens to make the equivalent of a DSLR setup.

There is nothing magic to most adapters—for manual lenses like the Leica lens Rockwell cited it’s simply an physical interface that spaces the lens out to make it the right distance from the sensor. Anyone that’s ever used macro tubes is already familiar with this idea.

If you take a $5000 Leica lens and put it on the Sony a7 sensor you’re absolutely going to get a better image than you would with a $500 lens on the Canon 5D Mark III, as long as the lens and the sensor are of higher quality.

If we look at the DxOMark scores (DxOMark provides independent sensor and lens evaluation) for the Canon 5D Mark III, we see it has a score of 81. The Sony A7 has as score of 90. That means that the Sony A7 produces an objectively better image, all else being equal. As long as the $5000 Leica lens is producing a better image than the $500 Canon lens, then it would produce a better image on the a7.

I’m not sure why Rockwell selected the Canon 20mm f/2.8 as it’s one of the worst performing lenses for Canon. Maybe he was trying to make a point by selecting an utterly terrible lens. But the DxOMark score for that lens is 17.

DxOMark hasn’t reviewed any Leica lenses, but they’re generally on par or better than Zeiss glass, and the lowest score for a Zeiss lens is 37.

There’s nothing magic about an adapter. No tricks, no additional glass. It’s just a shim that’s making the lens the right length to resolve to the sensor.

If every camera manufacturer used a different sized or shaped sensor, this would be different—each lens would be shaped to match up with the size of the lens. But a full-frame sensor is a full frame sensor and modern lenses are designed to work edge to edge.

Even if you take a film-era lens and use an adapter, you’ll see some quality degradation at the edges (since film-era lenses focus light differently than digital-era) but that doesn’t mean they should be avoided.

Here’s another thing  Rockwell gets wrong, where he says

AND – the adapted lenses are a farce. They won’t focus or stop down their apertures or do much of anything. Adapting lenses is mostly a prank for people who talk more than shoot.

This feels to me like an opportunity for Rockwell to drop a link to his popular and SEO-friendly page talking about the types of photographers he’s categorized. Basically he says the ones that talk the most are the ones that aren’t good shooters—which is humorous coming from a guy that blogs for a living.

Anyhow, lenses with adapters absolutely do stop down, depending on the lens and the adapter. Manual lenses stop down using the aperture ring on the lens, and many adapters like the Fotodiox Pro Lens Mount Adapter with Built-in Aperture Iris include aperture control.

This next section makes it seem like maybe Rockwell has never used a lens with an adapter.

What works best is to use the lenses sold for your camera. Use Sony NEX lenses on Sony, and use Fuji X lenses on Fuji, and use 4/3 lenses on 4/3 (they all interchange among 4/3). The optics are at least as good on these cameras as using LEICA or NIKKOR lenses, and they add zoom and autofocus and automatic exposure, and here’s the biggie: using the right lenses have diaphragms which stop down when shooting and then open again automatically for focussing. Adapted lenses demand you flick the diaphragm ring back and forth for each and every shot, unless you are shooting wide-open or want to focus stopped-down.

Honestly I have no idea what he’s talking about. I’ve been shooting 1970’s era Nikkor lenses on my a7R and a7II for months, and I’ve shot the Zeiss Otus with Canon mount for weeks. There’s no such thing as flicking open a diaphragm ring.

When was the last time you saw a diaphragm ring on a lens?

Then Rockwell veers into sexism and name calling.

Sorry female shooters, you’re not a real man. You can’t shoot a Sony or Fuji.

Also, the 85mm f/1.4 Nikkor lens I’ve attached to my a7R creates a better 85mm image than a Sony kit lens at the same equivalent focus, because those “girly-man zooms” don’t have f/1.4 capability, nor do they have the quality of glass of the old Nikkor lens.

Listen, we understand the need for bloggers like Rockwell to churn out a lot of works every single day in order to get people coming back to his site. He’s got an incredibly popular site in the U.S., it gets a ton of hits. It’s just that most of his information is either so biased as to be useless or clearly just link bait.

Just beneath the section on lens adapters, Rockwell discusses the packaging produced by different companies (because, you know, the type of box a camera comes in is incredibly important) and has this to say about Mirrorless—as if Mirrorless were a brand. “People use mirrorless to carry less, which is a great thing, but I prefer my iPhone 6 Plus when I’m going light.”

Okay, toss every mirrorless camera into the “going light” category and equate the performance to that of the iPhone, that makes sense.

This all wouldn’t be so strange, except Rockwell has made it clear that he uses (or used) Leica glass on his A7 in this article from the release of the a7. Rockwell wrote:

About a decade ago I challenged any experienced digital camera maker, preferably Canon, to produce a full-frame digital camera with a LEICA M mount and integral electronic finder.

After about ten years, Sony wins as of announcement in October 2013.

He also posted seven images that were taken with adapters, and all look just fine. So apparently adapters are good enough for Rockwell to use, but not good enough for you or me.

When it comes to things you find on the internet, remember what Abraham Lincoln said. 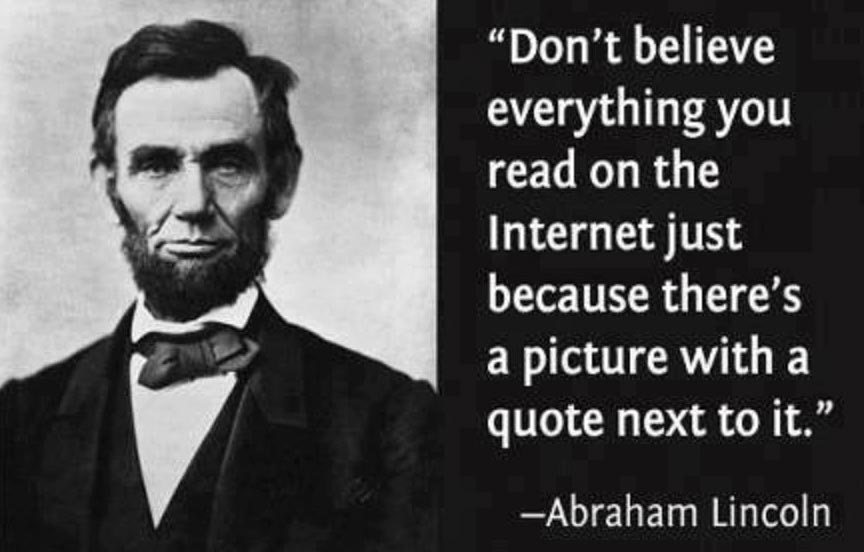